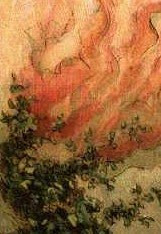 Reflections (Other)
“O Adonai and leader of Israel,
you appeared to Moses in a burning bush
and you gave him the Law on Sinai.
O come and save us with your mighty power.”