Go to content
Dominican Nuns Ireland
Published by Dominican Nuns Ireland in Reflections (Other) · 24 June 2021
St. Paul said, “Consider your own calling, brothers and sisters. Not many of you were wise by human standards, not many were powerful, not many were of noble birth. Rather, God chose the foolish of the world to shame the wise, and God chose the weak of the world to shame the strong, and God chose the lowly and despised of the world, those who count for nothing, to reduce to nothing those who are something, so that no human being might boast before God.” 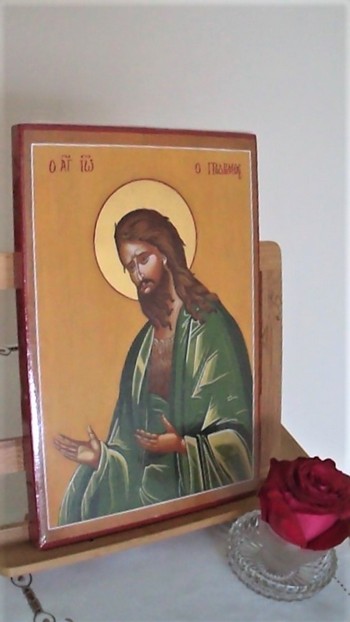 The reason why God ordinarily chooses those whom the world discredits is precisely so that they will be far more dependent on him. When we’re spiritually poor, we’re more aware of our dependence on God. When we’re weak, we’re strong. When we’re humble, as St. Paul says at the end of the passage, we recognize that Christ indeed is our “wisdom, righteousness, sanctification, and redemption.” That’s why we prayed today at the beginning of Mass that the same Lord “who willed that Saint John the Baptist should go ahead of [his] Son both in his birth and in his death,” might grant us, in our worldly foolishness, weakness and lowliness, “that as he died a Martyr for truth and justice, we, too, may fight hard for the confession of what you teach.” That truth, in all its simplicity, was to conversion and holiness, for us to point to Jesus as the “Lamb of God who had come to take away the sins of the world,” the  one who had come, like John, to give his life in witness to that truth and by that truth set us free .
The words of God "I will make you the light of the nations, that my salvation may reach to the ends of the earth" apply,  not only to St. John Baptist, but also to every Christian. “We are all called by the word and example of life to bear witness to Jesus Christ.