Go to content
Dominican Nuns Ireland
Published by Dominican Nuns Ireland in Reflections (Dominican) · 4 August 2018
Tags: St, Dominic, Icon
Every one of us is a living icon of God. He created us in his likeness and in his own image.
As you can see, this Icon of St. Dominic is not yet finished. At first I was disappointed not to have completed it in time for his Feast. Then it occurred to me that there was a message for me in this. Like this icon each one of us is not quite finished. We are still on a journey from darkness into the light. It is my hope that the image of St Dominic portrayed or perhaps more accurately, revealed to us through this icon may help us to enter the hidden, inner sanctuary of his heart and there discover more deeply the depths of our Dominican vocation—WHAT WE SHOULD LOOK LIKE.
The first portrait of St. Dominic was a word picture given to us by St. Cecilia, one of the first nuns of the Order, who knew him personally. For a long time historians did not give much credence to St. Cecilia’s description. Then, after World War 2, a scientific examination was done by anthropologists on St. Dominic’s remains and the results confirmed the authenticity of her description. Cecilia had said that he was of medium height- the measurements taken of his relics show that he was five feet six inches tall. She noted that, “His figure was supple; his face handsome and somewhat ruddy; his hair and beard had a reddish tinge. He was not a bit bald; his hair had a touch of grey.” At the bottom of the reliquary the examiners found some shreds of Dominic’s hair. It was exactly as Cecelia had said it was. “From his brow and his eyes” she continued, “there came a radiant splendor which won the respect and admiration of all; his eyes were large and beautiful. His hands were long and handsome and his voice was powerful and sonorous. He was always joyous and smiling except when moved with compassion at the affliction of his neighbours.” There are very few saints of so long ago whose personal appearance is so well documented.
The face is the mirror of the heart.  Those who are pure in heart, have faces that are transparent, unprotected. In them we see the nakedness and vulnerability of Christ. They have his freedom and spontaneity. Joseph Pieper has a lovely insight about this. He says “Only he who has a pure heart can laugh in a freedom that creates freedom in others.”
During the process of his canonization another very beautiful word picture of Dominic is given. It was said of him that ‘he spoke only with God or about God’. It is this particular depiction of Dominic that is the inspiration for my icon.
If you look at the icon you will notice that only the left hand of Dominic is visible. In his right hand he carries the Gospel of Matthew and the letters of St.  Paul. These were his most loved books.  We know from Bl. Jordan of Saxony, that they were his constant companions and he knew them by heart.  We do not see his hand.  It is not important that he carries the book in his hand but that he carries the Word in his heart. And it is from his encounter with the Word of God in his heart that he goes forth to bring that knowledge of God in Jesus to others.
His left hand is stretching up towards heaven. In this is revealed his deep closeness to God. “He spoke always with God”. “O Lord, have mercy on your people, what will become of sinners?” was his constant cry. His soul, writes Jordan, “was a sanctuary of compassion where he offers God all human misery.” Christ is the answer to the brokenness in each of our lives. Dominic’s whole life and mission was given over to preaching THIS truth.
The centrality of Christ our Saviour, in his saving mystery made sacramentally present in the Church, lies at the heart of Dominic’s spirituality. 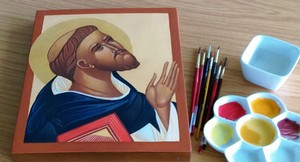 It is important to note that while stretching up to God, Dominic’s left hand is also breaking through the frame of the picture. I was not happy with this at first and kept attempting to change it- to keep his hand within the contours of the outline. But it just wouldn’t work. Finally it dawned on me. I wasn’t meant to change Dominic but rather to hear what he was saying to me through what I considered to be a flaw in my icon writing. And there it was. Because Dominic’s hand is stretched out towards God it is automatically also stretching out beyond the boundaries of his comfort zone to reach out to the peoples on the margins, just as Jesus did. This is the change contemplation works in us. We become the icon of Jesus, acting as Jesus did or allowing him to live through us. Last year Pope Francis wrote a letter to the priests and consecrated persons and invited them not to sit comfortably in their houses and churches but to go out to the fringes of society, to the uncomfortable places and bring the evangelical message to the broken and distant. Do we do that? Dominic did. He left his cloister in Osma, Spain when he discovered that the people of southern France did not know the truth about Christ. And when he heard about the pagan people of Prussia, Lithuania and Esthonia, the Baltic countries, he had a huge desire to bring them the Good News, the Word of Truth. Brothers called it “a dream of St. Dominic.” He never in fact got that far in person but his desire and prayer went beyond all boundaries, to even the most distant lands. I can say that my own vocation speaks to the reality of this holy dream of Dominic. I am one of those Baltic peoples that he so longed to bring Jesus to.
Now we come to Dominic’s halo. His halo like his prayer and zeal for souls is as large as his heart. It too goes beyond the frame designed to contain it and encourages us to dream our dreams, big dreams.
But that is not all, Dominic has also feet, beautiful feet! Feet with a fire in them! On Wednesday as we celebrate his Feast, we will hear in the first reading at Mass. “how beautiful are the feet of those who bring the Good News of Salvation”
Do we want to follow in his footsteps?