Go to content
Dominican Nuns Ireland
Published by Dominican Nuns Ireland in Reflections (Dominican) · 31 July 2021
Tags: St, Dominic
Under the Feet of My Brethren
After a long preaching tour in Northern Italy, brother Dominic falls gravely ill in Bologna. It is July 1221, and the town is so stifling, humid and hot that there is no hope of improvement for Dominic’s health. The decision is made to carry Dominic to a small Benedictine hermitage on the hillside outside Bologna. 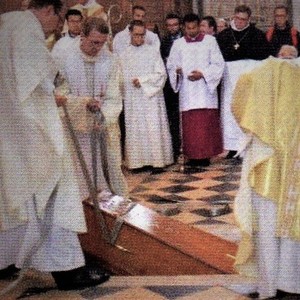 As he feared being buried in the Benedictine monastery where he had stayed, he begged to be carried anew among his brethren. Once he was back in town and settled in one of the convent’s cells, he was asked whether he wished to be buried next to the relics of this or that saint. Dominic gave this superb answer: “God forbid that I be buried except under the feet of my brethren.” Here, in the light of these “novissima verba,” we discover not only his humility but the deep love that Dominic had for his community. As death was approaching, Dominic asked insistently to be carried back to the convent so as to be buried “under the feet of my brethren.” This was his greatest wish. Yet this is only one aspect of the holiness of Dominic who, when he became a preacher, asked to be called “brother Dominic.” He desired to be with his brethren. Indeed, he was convinced that the sign of fraternity is already, in itself, a kind of preaching. For Dominic, the Order of Preachers is an Order which seeks to follow in the footsteps of Jesus the preacher, going through towns and villages to proclaim the good news of the Kingdom of God (cf. Mt 4:23-25, Mk 1:39, Lk 4:44). The reality of fraternity is thereby presented as an echo of salvation, which is at the heart of the Order’s proclamation. To proclaim the good news is to invite each one to discover, in their most intimate depth, the aspiration to live a life of fraternity with others in this world. It is to announce the hope that fraternity among all peoples anticipates the reality of the Kingdom in which the people of God will be gathered together on the last day. The sign of fraternity is thus the true ‘pulpit’ of preaching, presented both as a concrete, lived experience and as the hope of a future with God. It is a pulpit 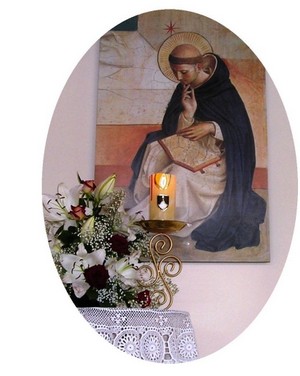 from which is proclaimed, on God’s behalf, trust in the human capacity to create with each other, and with God, relationships which “nourish life.” This is proclaimed not through theoretical discourses, but through listening to a Word verified in the concrete experience of a life lived with and for others. He asked to be buried “under the feet of his brethren.” We can probably interpret this desire as a sign of humility and lowliness. He who said that he would be more useful to his brethren after his death wishes to serve them by emulating the lowliness of Jesus who washed the feet of his disciples as their servant. Thus, Dominic’s determination with regards to his resting place could well point to his desire to be conformed through grace to the very acts of Jesus. To be conformed to the One who did not cling to his own life, but lived out his proclamation of the Kingdom by rooting it in the gift of his life, offering it so that all may have life and be received in the joy of fraternity. He wants to remain in the midst of his brethren, even in death. Such is the sign of this gift of a life “spent” speaking with men about God and with God about men. This sign thus manifests the deep meaning of itinerant mendicancy which Jesus had chosen, and through which He preached by giving his life. It is also the sign of the mendicant who, through his supplicant gesture, begs for the hospitality of his peers while inviting them to discover the new life of the Kingdom. “He came to his own…” (Jn 1:11). Yet Dominic’s request is even more significant, because it invites his brethren to draw their own sanctity from the reality of their lives as preachers. It was usual, at the time, to seek to be buried as close as possible to the relics of saints and confessors of the faith. In this sense, he desired to be buried as close as possible to the altar, in the hope of the communion of saints. Yet through his request Dominic expresses also that the reality of his brethren’s fraternity is, in his eyes, a place of holiness equivalent to the value granted to the witness of the saints. Once again, holiness can be considered as the pulpit of the preachers’ proclamation. They are invited, as brothers, to integrate their faith in the communion of saints within the concrete realities of life, and to draw from it the power of the word on the itinerant preacher’s lips. Communities of preachers, holy preachings!
from the letter of fr. Bruno Cadore op -
'The holiness of Dominic, a light for the Order of Preachers'.