Go to content
Dominican Nuns Ireland
Published by Dominican Nuns Ireland in Reflections (Dominican) · 27 April 2020
Tags: St, Catherine
CATHERINE ‘WHO IS NOT’
I will all the more
Gladly boast of my weaknesses,
That the power of Christ
May rest upon me.
(2 Cor. 12, 9)
Our paschal candle reminds me of St. Catherine’s self-giving life. It sheds its light, going out and burning down.
50 years ago Pope Paul VI proclaimed her as Doctor of the Church. In her ‘Dialogue’ she herself has something to say about what being a doctor of the church means: ’The doctors have been enlightened by a supernatural light and have become lights for others dispelling the darkness of error and showing the way of the truth.’
Catherine, in fact, seems to know no truth but the truth of God, the truth that is known to faith alone.
It was not her truth or her will that triumphed at all in the end but her struggle to bring the world closer to realizing God’s truth and love.
At the end of her life Catherine was involved in several of the major concerns of the fourteen century Europe- including peace among the Italian cities, the Crusade, the return of the pope from Avignon to Rome ,and church renewal. But it was not always successful. Her pleadings had ultimately been ignored by those she most wanted to persuade. She had failed to convince Pope Urban VI to temper the arrogance and violence that was dooming his efforts at reform. She had, above all, apparently only aggravated the schism that she had given every drop of her energy trying to prevent and to end it. 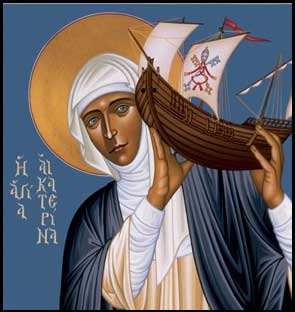 Once exhausted she went to the basilica to pray in front of the mosaic of the apostle in the boat – St. Peter. In her vision the boat went out from the picture with the whole weight of the Church on her shoulders, pressing her into the ground till she no longer rise.
From this vision we can glimpse deep inside of St. Catherine, the mystery of God, His way and not ours, Gospel logic – from back to front, ’who loses his life for my sake will find it’ (Mt.16.25), ’the first will be last ,and the last first’ (Mt.20.26). This is the truest depth in paradox, of Catherine’s greatest weakness. She like every one of us had to embrace redemption in her own brokenness for her wholeness to be fully realized. It from her brokenness the light of God’s mercy and hope shines for our own wounds. It is out of the kenosis of Christ that all new life springs out.
‘Do you know daughter, who you are and who I am? If so, you have blessedness in your grasp.
You are the one who is not, and I am the One who is’.
But isn’t this the sort of humility we moderns have put aside for a more affirming, positive view of ourselves as God’s creation? No, not if we see it as Catherine saw it.
St. Catherine pray for our broken humanity that we can to breathe the God’s oxygen of TRUTH!
Truth has no expiry date. Truth exists (only lies are invented)