Go to content
Dominican Nuns Ireland
Published by Dominican Nuns Ireland in Reflections (Other) · 18 May 2020
Tags: Mary, Eucharist
With St. John Paul II, on his 100 Birthday we look at Mary, through his eyes …
Mary is a “woman of the Eucharist”  in her whole life.
If we wish to rediscover in all its richness the profound relationship between the Church and the Eucharist, we cannot neglect Mary, Mother and model of the Church. At first glance, the Gospel is silent on this subject. The account of the institution of the Eucharist on the night of Holy Thursday makes no mention of Mary. Yet we know that she was present among the Apostles who prayed “with one accord” (cf. Acts 1:14) in the first community which gathered after the Ascension in expectation of Pentecost. Certainly Mary must have been present at the Eucharistic celebrations of the first generation of Christians, who were devoted to “the breaking of bread” (Acts 2:42). 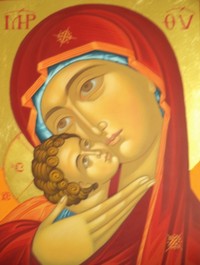 In a certain sense Mary lived her … Eucharistic faith even before the institution of the Eucharist, by the very fact that she offered her virginal womb for the Incarnation of God’s Word. The Eucharist, while commemorating the passion and resurrection, is also in continuity with the incarnation.
At the Annunciation Mary conceived the Son of God in the physical reality of his body and blood, thus anticipating within herself what to some degree happens sacramentally in every believer who receives, under the signs of bread and wine, the Lord’s body and blood.
As a result, there is a profound analogy between the Fiat which Mary said in reply to the angel, and the Amen which every believer says when receiving the body of the Lord. Mary was asked to believe that the One whom she conceived “through the Holy Spirit” was “the Son of God” (Lk 1:30-35). In continuity with the Virgin’s faith, in the Eucharistic mystery we are asked to believe that the same Jesus Christ, Son of God and Son of Mary, becomes present in his full humanity and divinity under the signs of bread and wine.
“Blessed is she who believed” (Lk 1:45). Mary also anticipated, in the mystery of the incarnation, the Church’s Eucharistic faith. When, at the Visitation, she bore in her womb the Word made flesh, she became in some way a “tabernacle” – the first “tabernacle”in  history – in which the Son of God, still invisible to our human gaze, allowed himself to be adored by Elizabeth, radiating his light as it were through the eyes and the voice of Mary. And is not the enraptured gaze of Mary as she contemplated the face of the newborn Christ and cradled him in her arms that unparalleled model of love which should inspire us every time we receive Eucharistic communion?
In her daily preparation for Calvary, Mary experienced a kind of “anticipated Eucharist” – one might say a “spiritual communion” – of desire and of oblation, which would culminate in her union with her Son in his passion, and then find expression after Easter by her partaking in the Eucharist which the Apostles celebrated as the memorial of that passion.
What must Mary have felt as she heard from the mouth of Peter, John, James and the other Apostles the words spoken at the Last Supper: “This is my body which is given for you” (Lk 22:19)? The body given up for us and made present under sacramental signs was the same body which she had conceived in her womb! For Mary, receiving the Eucharist must have somehow meant welcoming once more into her womb that heart which had beat in unison with hers and reliving what she had experienced at the foot of the Cross.
“Do this in remembrance of me” (Lk 22:19). In the “memorial” of Calvary all that Christ accomplished by his passion and his death is present. Consequently all that Christ did with regard to his Mother for our sake is also present. To her he gave the beloved disciple and, in him, each of us: “Behold, your Son!”. To each of us he also says: “Behold your mother!” (cf. Jn 19: 26-27). 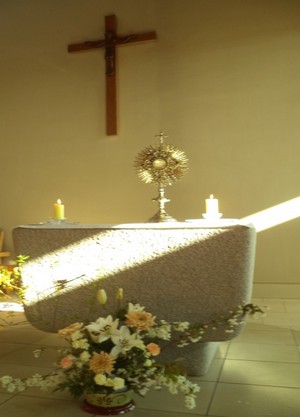 Experiencing the memorial of Christ’s death in the Eucharist also means continually receiving this gift. It means accepting – like John – the one who is given to us anew as our Mother. It also means taking on a commitment to be conformed to Christ, putting ourselves at the school of his Mother and allowing her to accompany us. Mary is present, with the Church and as the Mother of the Church, at each of our celebrations of the Eucharist. If the Church and the Eucharist are inseparably united, the same ought to be said of Mary and the Eucharist. This is one reason why, since ancient times, the commemoration of Mary has always been part of the Eucharistic celebrations of the Churches of East and West.
In the Eucharist the Church is completely united to Christ and his sacrifice, and makes her own the spirit of Mary. This truth can be understood more deeply by re-reading the Magnificat in a Eucharistic key. The Eucharist, like the Canticle of Mary, is first and foremost praise and thanksgiving. When Mary exclaims: “My soul magnifies the Lord and my spirit rejoices in God my Saviour”, she already bears Jesus in her womb. She praises God “through” Jesus, but she also praises him “in” Jesus and “with” Jesus. This is itself the true “Eucharistic attitude”.
Lastly, the Magnificat reflects the eschatological tension of the Eucharist. Every time the Son of God comes again to us in the “poverty” of the sacramental signs of bread and wine, the seeds of that new history wherein the mighty are “put down from their thrones” and “those of low degree are exalted” (cf. Lk 1:52), take root in the world. Mary sings of the “new heavens” and the “new earth” which find in the Eucharist their anticipation and in some sense their programme and plan. The Magnificat expresses Mary’s spirituality, and there is nothing greater than this spirituality for helping us to experience the mystery of the Eucharist. The Eucharist has been given to us so that our life, like that of Mary, may become completely a Magnificat!
Here is the Church’s treasure, the heart of the world, the pledge of the fulfillment for which each man and woman, even unconsciously, yearns.        (Encyclical-‘ Ecclesia de Eucharistia’ )