Go to content
Dominican Nuns Ireland
Published by Dominican Nuns Ireland in Reflections (Other) · 29 March 2020
Tags: Lent, Lectio, Divina
Do you believe this?
The Spirit of him who raised Jesus from the dead is living in you
Rom 8.11
We see in today’s Gospel reading, the friends of Jesus dealing with anxiety, sickness and death, part of life’s experience for each and every person in our day.
Aren’t we all Lazarus?
Are there not parts in each one of us, in me, that are dead, infected by the viruses of sins?
All that is dead in us, more or less hidden in our unconscious self, in the shadow areas of the ‘tomb’ of our being, provokes a kind of death around us. It must be remembered that the greatest and most terrible death is not death of the grave but the death of the heart while one is apparently still alive.
We judge and condemn and push people down, wanting to show that we are better than they. We refuse to listen to those who are different and so we hurt them. All these destructive acts have their origin in all that is dead within us, all that creates a stench in the hidden parts of our being, which we do not want to look at or admit. But to be aware of our deadness is the beginning of the process for living fully.
Jesus wants to raise us up and to become fully alive. 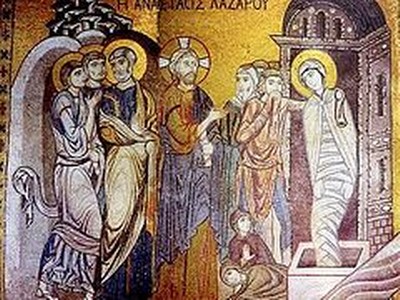 ’Come out!’
He calls us out of the tomb we carry within us. He is always at work bringing new life out of death. That is the promise he make to Martha when he says ’’If anyone believes in me, even though they die, they will live, and whoever lives and believes in me will never die’ . The Lord does not prevent death, even the death of those most precious to us. He does not promise Martha to save those who believe in him from death’ even though they die’. Jesus does promise, however, that those who respond to his offer of friendship, those who believe in him will live beyond death’ even though they die, they will live ’they will not experience ultimate or final death, they ‘will never die’ in that sense. His love for us is stronger than death. Our union with the Lord through faith is not severed by death.
Having made this powerful promise to Martha, Jesus then asks her
‘Do you believe this?’
The same question is asked of us all.
‘Only a God who loves us to the extent of taking upon himself our wounds and our pain, especially innocent suffering, is worthy of faith.’ (p. Benedict XVI)
Today we have many heroic, courageous people like Mary and Martha or Don Giuseppe Berardelli who had a faith which sees the nearness of God in spite of darkness. In fact, ‘it was the very darkness which expanded their vision to see the distant stars’. We all called to be collaborators of Christ, by faith, love, hope, service, prayers…And it is not because God needs our help ‘to take the stone away’ but because He loves us!